Being the blogger, regularly, I get a lot of emails, messages regarding events, sponsored posts, etc. Sometimes, it becomes pretty boring to filter everything out & choose the best deals out there. Few days back, while browsing on Facebook, one post from my ‘Pune Bloggers Facebook Group‘ grabbed my attention. 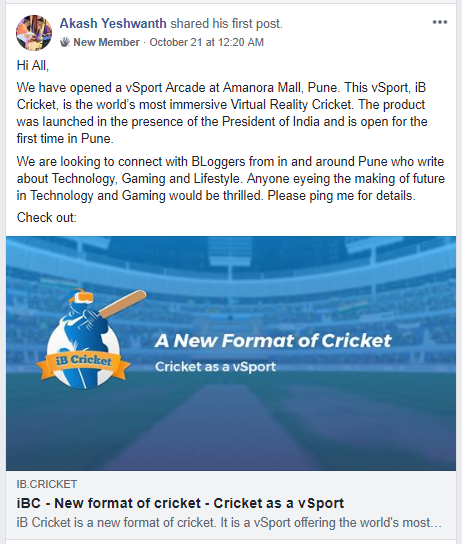 Since AR & VR is already trending tech, I sensed some kind of awesomeness. Immediately, I contacted Akash Yeshwant who is working at iB hub via Facebook. iB hub is startup incubator which helps startups to grow, raise funding, etc. Then, he introduced me to iB Cricket which is in simple words, next level VR Cricket game or vSport 😎

vSports are games and experiences that take the competitive and physical nature of traditional sports and merge it with the digital immersiveness of virtual reality.

He scheduled the demo the very next day at Amanora Mall Pune. I was already excited for the same but worried also. Because if you have played VR games or watched VR content, then you may feel a headache, blurry vision problems, etc. after experiencing it. After reaching the venue with my close friend Manisha, the iB Cricket Pune Location Manager: Mr. Srikar greeted me & started the demo. 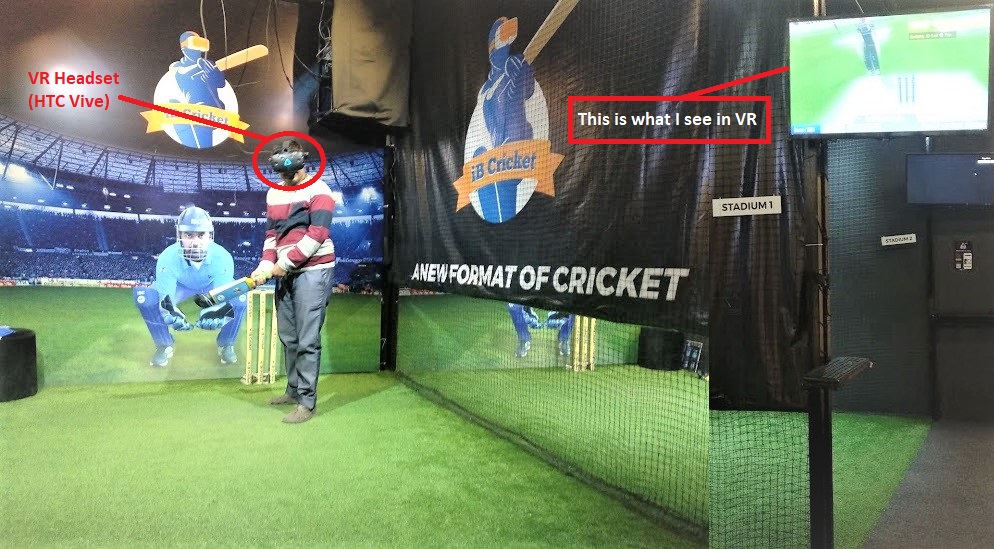 Setup was very easy. It only took about 3 minutes approximately. I only need to adjust VR headset respective to my eyes and head position to get clear VR experience. The controller is fitted on the bat. They chose HTC Vive VR because of better tracking by controller & overall VR quality. The age is not a barrier here. Anyone can play because everything is in VR & you only have to move your bat.

Once you are entered into the VR world, the game starts with the dressing room where you can choose your outfit, team, color, etc. You also have the option to choose a stadium. If you are a cricket fan, how will you feel if you get the chance to play cricket at The Lords, Cricket Ground, London or Wankhede Stadium, Mumbai? This is exactly what you can experience in VR. It’s like a dream come true for every true cricket fan out there. 🤤

After you are done with initial settings, you can have practice mode or you can directly start the match. The movement of the bat is tracked by the sensor fitted & it’s used to calculate the direction, speed of the shot. I played the game for around 20 minutes but didn’t experience any headache or blurry vision. Also, the performance of the game was amazing since, due to heavy resource usage, sometimes VR games tend to lag or may produce frame drops. Everything was happening in realtime. It was buttery smooth experience. For now, you can experience the iB Cricket VR Game at Amanor Mall, Pune in India. But soon, they are planning for global launch & more such experience centers.

Initially, they only have the batting mode but in future, we will see bowling mode, multiplayer mode, etc. that’s too in realtime. They will also launch the Mobile App to interact with other players. Just imagine how awesome it would be if you can play the match with your cousin who is in a different country that’s too in VR without any lag or frame drops.

This immersive experience comes with some limitations. I personally observed that the resolution of VR headset was not high but okay. I was able to count individual pixels. But it’s technology limitation and we will hopefully see significant improvements in the future. For now, the game is not available for Cardboard VR by which you can convert your phone into VR headset without burning the hole in your pocket.

Overall, I found iB Cricket highly innovative & amazing. I hope, it will make the new benchmark in VR industry. iB Cricket is the principal sponsor for the Bengal Tigers at T10 League 2018 in Dubai. We wish very best of luck to iB Cricket from TechnoClever! Kudos & keep innovating 🤘